Here is a compilation with books on football (soccer), including the history of the game, the cultural aspects, the tactics, the stats, biographies of players, fiction and other subjects. 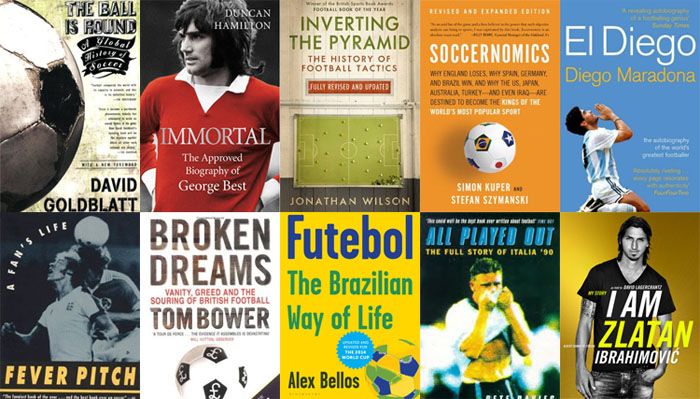 The history, the culture and the politics

The Ball is Round: A Global History of Football – David Goldblatt
Definitely one of the football books to read if you are interested about the history of the game (the US publication is titled The Ball is Round: A Global History of Soccer). With almost 1,000 pages, it possesses an extensive journey through the subject. And maybe more important is the way it stands out by its journalistic craftmanship.
Released: 2008
Said about it: "Goldblatt's magnum opus, at close to a thousand pages, is an ambitious project realized in a most impressive manner. Anyone with a brain and an interest in football will enjoy this book: just don't drop it on your foot." – The Daily Telegraph

The World's Game: A History of Soccer – Bill Murray
A straight forward attempt to tell the history of football beginning in pre-industrial times and the growth to the 1994 World Cup in less than 300 pages.
Released:1998

Brilliant Orange: The Neurotic Genius of Dutch Soccer – David Winner
A well-received book about football and especially about the invention Total Football, but also an interested look at the history of the game in the Netherlands from a cultural perspective. A book that distinguishes itself from many other books on football and somebody without a big interest of sport should also be able to read it.
Released: 2008

Futebol: The Brazilian Way of Life – Alex Bellos
We all know how closed football and Brazil are connected and reading Futebol: The Brazilian Way of Life enriches that truism to a deeper and more nuanced knowledge. An earlier work and analogues in choice of topic is Soccer Madness by Janet Lever from 1995.
Released: 2014
Said about it: “The book is full of intriguing sidelights on Brazilian popular culture, its hedonism, piety and wondrous absurdity.” – The Guardian

Morbo: The Story of Spanish Football – Phil Ball
Morbo was awarded the GQ Sports Book of the Year and is recommended if you want to read a book about the Spanish football history. The author Phil Ball is specialized on Spanish football and has also written an appreciated book on Real Madrids history.
Released: 2011
Said about it: “Ball's overview of Spanish football feels pleasantly succinct at only 240 pages and never drags.” – Soccerphile.com

Broken Dreams: Vanity, Greed and the Souring of British Football – Tom Bower
The winner of William Hill Sports Book of the Year in 2003 tells the story of football as a business that exploiting the sport for the lucrative reasons. Tom Bower investigates the cash flow in football and what he finds out is always very pleasant.
Released: 2003
Said about it: “In charting the financial careers of some of the era's leading managers, agents and owners, Bower reveals a systematic culture of bungs, sweeteners, undeclared payments, off-book loans and gifts.” – Independent

The Game of Our Lives: The Meaning and Making of English Football – David Goldblatt
Portraying football in England as a cultural phenomenon and a huge entertainment industry.
Released: 2015

The Club – Joshua Robinson & Jonathan Clegg
With the long subtitle "How the English Premier League Became the Wildest, Richest, Most Disruptive Force in Sports", this book is another take on English football seen from mostly a business perspective. The Club is a well-research and proficient told inside story of the birth and expansion of the Premier League. How the league got to be the most lucrative by focusing on entertainment; but also how the swelling ticket prices excluded many of the old fans.
Released: 2018

Dirty Northern B*st*rds! And other tales from the terraces: The story of Britain's Football chants – Tim Marshall
Tim Marshall's writings isn't mainly associated with football, he is better known for his reports of foreign news and as the author of the bestseller Prisoners of Geography. Dirty Northern B*st*rds! tells the history of Britain's football chants.
Released: 2018

The tactics and the stats

Inverting the Pyramid: The history of football tactics – Jonathan Wilson
This is one of the most impressive books written about football (soccer) in aspects of research. The writer, Jonathan Wilson, must have been watching videos of old football games for endless of hours to present so many details of historical matches. His book takes a full approach on the tactic aspects of the game and the theory behind the development: from extreme attack to extreme forms of defense since football emerge until today. It discusses several formations used over the years: who was the inventor and what are their pros and cons. You probably knew about Total Football and perhaps Catenaccio, but maybe you haven't heard about W-system or W-defense – this book teaches terms and historical facts to making you a football wiz.
Released: 2013
Said about it: "Must surely go down as one of the most revelatory sports books of the year, as well as one of the best." – The Scotsman

The Numbers Game: Why Everything You Know About Soccer Is Wrong – Chris Anderson and David Sully
Another example of the nerds' conqueror the world era and if you want to fill your stock of football stats here is the source. Find out about long to short pass ratio, goals scored as a function of possession, goals conceded as a function of turnovers and much more. It may sound nerdish, but the authors are writing entertaining about football as well. This is the book to read if you want to win discussions about football.
Released: 2013
Said about it: “Anderson and Sally are adroit at guiding their readers but never patronizing or boring them.” – The Guardian

Soccernomics – Simon Kuper and Stefan Szymanski
If you want theoretical insights and if you want to view the game from a non-conventional way this book by Simon Kuper (also the awarded author of Football Against the Enemy and The Football Men) and Stefan Szymanski is for you. In some aspects linked to Anderson and Sally in The Numbers Games, the authors of Soccernomics are investigating football from new angles and come up with some surprising and astonishing results. The last part of the subtitle “Why the U.S., Japan, Australia-and Even Iraq-Are Destined to Become the Kings of the World’s Most Popular Sport” is, however a selling tactic and this statement is only covered by a short and speculative chapter.
Released: 2014
Said about it: “[Kuper and Szymanksi] do for soccer what Moneyball did for baseball-put the game under an analytical microscope using statistics, economics, psychology and intuition to try to transform a dogmatic sport.” – New York Times

How to Score: Science and the Beautiful Game – Ken Bra
Looking at football as a science Ken Bray explains and analyzes the tactics behind the game. The book includes a historical overview of tactics and many other areas, such as statistic knowledge of today’s modern matches.
Released: 2006

I Am Zlatan – David Lagercrantz
Although it’s not written by Zlatan himself (David Lagercrantz is the actual writer), it’s based on Zlatan’s own story about his life. I Am Zlatan has become an international bestseller.
Released: 2013

El Diego: The Autobiography of the World's Greatest Footballer – Diego Maradona
The most gifted player of all time? The story of Diego Armando Maradona is about success, but also the controversial episodes on (the hand of God) and outside the pitch (the cocaine, ephedrine and shootings against journalists). This is Diego’s own words.
Released: 2013

Immortal: The Biography of George Best – Duncan Hamilton
Duncan Hamilton work is not the only biography on the Wales legend, but perhaps the best. Few players lived as a fabulous life beside the pitch as George Best and no wonder that biography’s about him are sought after.
Released: 2014

Provided You Don't Kiss Me: 20 Years With Brian Clough – Duncan Hamilton
Brian Clough was a unique manager and his life is also interesting enough to be both object for a book and a motion picture (The Damned United).
Released: 2008

Other football biographies and autobiographies that could be mentioned are:

Fever Pitch: A Fan’s Life – Nick Hornby
Probably no other book about football has been more widely mention in popular culture than this one. A motion picture based on the book became a hit a few years later.
Released: 1992

Club Soccer 101: The Essential Guide to the Stars, Stats, and Stories of 101 of the Greatest Teams in the World – Luke Dempsey
A quite self-explanatory title says a lot of that this one is about. A chance to deepen your knowledge of the biggest clubs.
Released: 2014

All Played Out: The Full Story of Italia ´90 – Pete Davies
A noticed book about the story of England in the World Cup in 1990.
Released: 1998

Richer Than God: Manchester City, Modern Football and Growing Up – David Conn
The story about the big takeover of Manchester City by Sheikh Mansour and questions about the role of money in today’s game of top football.
Released: 2016

The Second Most Important Job in the Country – Niall Edworthy
This book conveys the difficulties of being the manager of the English national team looking back at the accomplishment on different managers.
Released: 1999

My Father and Other Working Class Football Heroes – Gary Imlash
A touching story written by the son of the football player Gary Imlach.
Released: 2006

The Fix: Soccer and Organized Crime – Decland Hill
Unfortunately, match fixing is an actual problem with today’s sport and as the subtitle of the book suggests, soccer and organized crime are sometimes linked. As an investigating journalist Decland Hill infiltrates and acquire insights to the world of organized match fixing.
Released: 2010

Send tips about other noteworthy books on football to: info@footballhistory.org