In the history of the Premier League, only six clubs have won the competition: Manchester United, Manchester City, Arsenal, Chelsea, Leicester … and Blackburn Rovers. On top of being in such exclusive company, Blackburn can also boast with two First Division titles, six FA Cups and one League Cup. Additionally, they made their mark by becoming the founder members of both the Football League and the Premier League.

Blackburn Rovers Football Club was founded in 1875 by Arthur Constantine and John Lewis, two young men with the idea of forming a club that would be eligible to play under Association rules. Almost right from the beginning, the club put its name on the map by winning three consecutive FA Cup trophies between 1884 and 1886 (less known today is that Blackburn Olympic existed from 1877 to 1889 and managed to win the FA Cup before Rovers, in 1883).

Blackburn was one of the first clubs that was part of a historical shift in which football clubs with working-class background took over the game from the clubs that was associated with a school, such as Oxford University, Old Carthusians and Old Etonians.

Along with eleven other clubs, Blackburn were the founder members of the Football League in 1888. Two years later, the club's new-found popularity led them to move into the Ewood Park, a stadium that would remain their home to this day. The move was followed up by claiming two additional FA Cups in 1890 and 1891.

Relegation to the Second Division

With two First Division titles in 1912 and 1914, it seemed like Blackburn were poised to become one of the giants of English football. But the World War I and subsequent decline eventually saw the club drop off the map. The 1928 FA Cup victory would be Blackburn's last trophy for the next seven decades, and they were soon relegated to the Second Division.

At the beginning of the 90s, Blackburn were still firmly in the Second Division. But their fortunes changed when the club was bought by local steel magnate Jack Walker; being an avid supporter of Blackburn since his childhood days, Walker had no problems with investing large sums of money in the club. Following the appointment of Kenny Dalglish as manager in 1991, Blackburn earned promotion just in time to join the newly-formed Premier League.

Return to the top league

Once in the top flight, Walker went one step further and broke the English transfer record by paying 3.5 million pounds for the supremely talented Alan Shearer. It was this shrewd acquisition that led to Blackburn reaching the stars once again; led by a partnership of Shearer and Chris Sutton which resulted in more than 50 goals between the two of them, Blackburn won the Premier League in 1995. 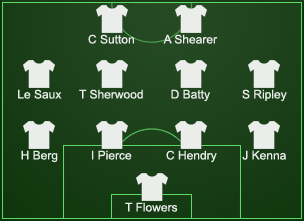 Blackburn's typical line up in the 1994-95 season
That Cinderella story was, however, the end of Blackburn's time in the spotlight. Chris Sutton got injured whereas key players like David Batty and Alan Shearer, were grabbed by other clubs. With the championship team broken up even quicker than it was assembled, the club was relegated from the Premier League in 1999. The passing of Jack Walker in 2000 would mean that Blackburn no longer had the same economical strength.

In 2002, Blackburn won its last trophy by defeating Tottenham Hotspur 2-1 in the League Cup final.

Since the season 1974-1975 the crest has been on the team's shirt. The first version of the crest was consisting of the Lancashire rose with the B.R.FC initials below. Later versions added a circle with the team name and establishing year. Also at the bottom, the latin words "Arte Et Labore" could be found which in English translates to "By skill and by labour" and remains from an old town motto of Blackburn.