Bolton Wanderers were among the twelve teams that were the originals members of the English Football League. They came in fifth place the first season (1888/1889) and in other words, it is a club with plenty of history. The club has never won the top leagues, but have won the FA Cup four times and been runners-up twice in the League Cup. Two of the most prominent players over the years are Joe Smith and Nat Lofthouse. 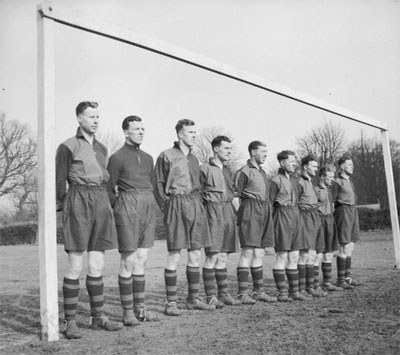 Men from Bolton Wanderers in 53rd Field Regiment during WWII.

Bolton Wanderers FC was founded in 1874 (not to be confused with Wanderers FC), by pupils in Christ Church School on Blackburn Street. The second name “Wanderers” came from the fact that the club often changed head quarter.

They were constantly playing in one of the two highest tiers in the league system until they were relegated to the third division 1983 after finishing last in Second Division. After another move in wrong direction, to the fourth division for one season in the 1980s, they ran from the lowest to the highest tier in English professional football in only seven years, and when the Division One became Premier League, Bolton was one of the participating teams.