With 50 Scottish Championships and 37 Scottish Cups in their trophy cabinet, it's fair to say that Celtic FC is a club synonymous with Scottish football. Along with their domestic successes, they were the first British club to win the European Cup, having done so in 1967. Their Old Firm derby with Rangers is one of the most popular rivalries in the football world, and the two clubs have a long history of competing against each other. 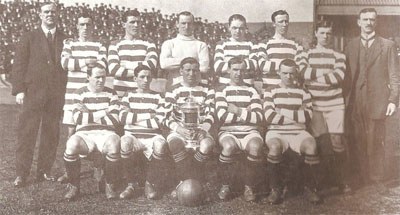 With a foundation date of 1888 and location of East End of Glasgow, Celtic was formed as a means of fundraising for the "Poor Children's Dinner Table" charity.

A year later, the club played its first official match against Rangers, thus setting the stage for a rivalry based as much on the clubs' political and religious differences than on their on-field disputes.

The two teams gathered most supporters of the Glasgow teams in the 1890s and earned them the collective name Old Firm. For the first couple of decades, Celtic was slightly more successful of the two clubs, winning 17 Scottish Championships and 12 Scottish Cups until 1927.

The large appetite for football among the Glaswegian and problematic social conditions would lead to crowd disorders. Beside the special social situation, the development of "brake clubs" in the 1880s, which can be seen as a pre-era of hooliganism, would contribute to this. The brake clubs was the first away fans in an organized sense and would travel with horse-drawn carriages (also known as brakes, thus the name brake club). The very first brake club was formed in Glasgow’s east end.

Even with Jimmy McGrory – one of the most prolific British strikers of all time – as a focal point of their attack, Celtic slowly found itself on the back foot in a battle with Rangers. The next four decades saw Celtic win the Scottish Championship a mere three times, a far cry from the dominance they exerted early on in the century. They also managed to win five Scottish Cups during this time, but it was a small consolation for the disheartened fans. 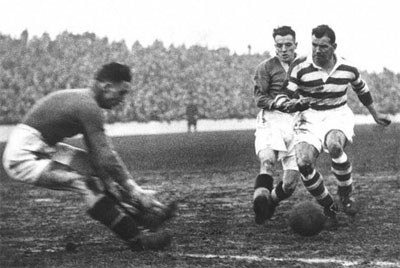 The Celtic player Jimmy McGrory with the ball.
Advertisement

With Jock Stein taking over as manager in 1965, things immediately took a turn for the better. With his undeniable charisma and influence, Stein transformed Celtic's under-performing team into a machine that claimed nine consecutive Scottish Championships from 1966 to 1974. The 1967 season was particularly memorable, with Celtic winning every single competition they played in, including being the first non-Latin side to win the European Cup. 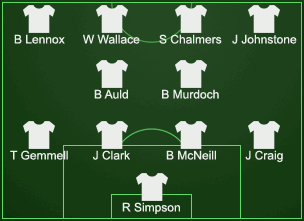 The following period saw Celtic enjoy further domestic success, including five additional Scottish Championships and four Scottish Cups before the end of the 80s. But the early 90s turned out to be a time of decline, with the club's numerous financial difficulties having them come precariously close to bankruptcy. They were eventually saved by businessman Fergus McCann, who took over the club and placed it on the stock market. This turn of events led to Celtic getting back on the road to recovery, winning a Scottish Cup in 1995 and a Scottish Championship in 1998.

In 2000, Martin O'Neill took over as manager and led the club to a Double in his first season in charge. This would soon prove to be another turning point in the club's history, as Celtic went on to claim ten Scottish Championships and six Scottish Cups in the years that followed, once again replacing Rangers as the most dominant club in the country.

The club adopted a logo in the 1930s with a green four leaf clover as the dominant symbol. The leaf is outlined by a circle with the text “The Celtic Football Club” and the year of inauguration.