Middlesbrough FC is a football club with a very long history. They reached the final in the FA Cup 1997 and won the Football League Cup in 2004. Among the latest achievements for the club was to reach the UEFA Cup final in 2005-2006, which ended with a loss against Sevilla. Among the most prominent player George Camsell, George Hardwick, Wild Mannion, Nick Barmby and Fabrizio Ravanelli could be mentioned. 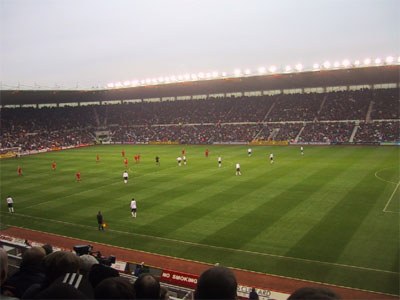 Middlesbrough vs Liverpool at Riverside Stadium in 2003.

The club was founded in 1876 by Middlesbrough Amateur Cricket Club. The first official match is played the following year against Teesside Wanderers at Old Archery Ground, ending in a draw.

Middlesbrough entered the FA Cup for the first time for the 1883-84 season, but they would partly remain as an amateur club until 1899 and winning the FA Amateur Cup twice during this period (1895 and 1898).

The North Yorkshire team became a member of the Football League in 1899 and played their first season in the second division. They reach the top-tier for the first time in 1902 and their best Division One position is a third place, which happened in 1914.

In 1986, the club was facing a bankruptcy. It was followed by a shift of ownership and a reconstruction. The club had to start over in Division 3, but would climb their way up and played in the Premier League season 1996-97.

The logo uses a crest with a stylized red lion in the center. The same depiction of a lion (although blue) can be seen in the Middlesbrough coat of arms – the lion is a common heraldic feature and can be seen in crest belonging to clubs such as Aston Villa, Chelsea and Rangers.