OGC Nice is one of the most successful football clubs in France with four national champion titles in addition to three Coupe de France victories. The OGC abbreviation stands for Olympique Gymnaste Club goes back to the start of the club when the club was named Gymnaste Club de Nice. 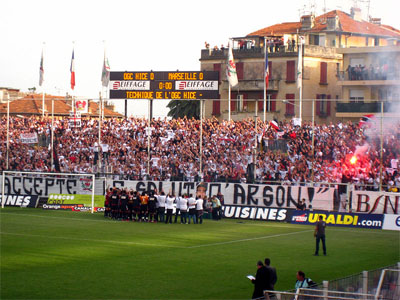 OGC Nice was one of the twenty original members of the French football ligue when is was established in 1932.

The logo consists of a crest in front of a stylized eagle. The crest includes the letters “OGC Nice” and red and black stripes. There are a few versions of the logo through the club’s history in which an eagle has been present. The banner in the bottom part is a relatively new feature in the logo and states the year of foundation.