For one of the oldest professional clubs in England, Preston North End FC has had a surprisingly underwhelming history -- at least silverware-wise. Though they’ve won two First Division titles and two FA Cups, they’ve spent the biggest part of their history in the lower divisions of English football. They play their home games at Deepdale, the oldest continuously used football stadium in the world. 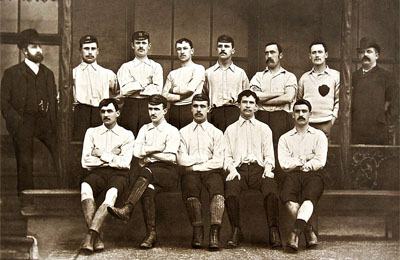 The team that won the first league season in England.

Though Preston was originally a cricket club – its football pre-history period starts in 1863 and include a rugby section from before its members started playing football as a winter activity shortly after moving to Moor Park. In 1880, the association code was fully adopted, and the club was officially founded. Over the next few years, club chairman William Sudell started recruiting players from Scotland instead of focusing on local talent. This made Preston one of the first professional clubs in the country, giving them a leg up on the competition.

As one of the powerhouses of English club football during the 1880s, they were favorites to win in most competitions. In the first round of the 1887-88 FA Cup, they beat Hyde with 26-0, still a club record and one of the biggest blowouts in British football. 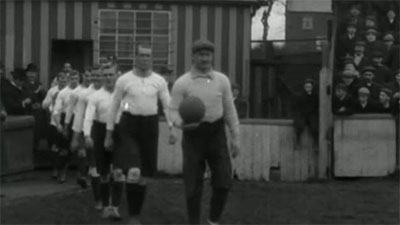 Preston players walking out on the field.

In 1889, Preston won the inaugural First Division of the Football League, along with their first FA Cup. Even more impressively, they did so without losing a single game in either competition, earning the nickname “The Old Invincibles.” One of the major reasons to the supremacy was that the team was flooding with Scottish professionals, which was made possible thanks to Sudell's money.

The team proceeded to defend its First Division title in 1890, but these remain the only major league trophies in club history. However, they did finish as runners-up in the three seasons that followed.

Following a turbulent period which saw Preston bounce between the two top divisions of English football, the club finally found some consistency in the mid-30’s. During this period, they managed to win their last major trophy to date: the 1938 FA Cup. In the final match, Preston defeated Huddersfield on an extra-time winner by George Mutch. This team also included right-back Bill Shankly, who would later reach fame as the manager of Liverpool.

Following the end of WWII, Preston continued to play consistent football. From 1946 to 1960, they spent only two seasons outside of the First Division, recording solid results along the way. This era was marked by Tom Finney, known as the “Preston plumber” for his side business. Finney remains the greatest player in the history of the club as he went on to spend his entire career in Preston, scoring 187 goals in 433 appearances.

One year after Finney’s retirement in 1960, Preston was promptly relegated to the Second Division. They haven’t returned to the top flight since, and were relegated to the Third Division for the first time in 1970. In the 80’s, the club started facing a threat of closure, especially after spending four years in the bottom division.

A takeover by heating manufacturer Baxi, which owned the club from 1994 to 2002, gave the club some time to recover. During this period, Preston managed to establish itself as a second-tier team, but started facing further financial troubles by the end of the decade. The team was then taken over by Trevor Hemmings, a Lancashire businessman and long-time fan. Under his leadership, Preston has been well-placed in the EFL Championship.