Historically speaking, Rangers FC (also known as Glasgow Rangers) is one of the most dominant football clubs on the British Islands. Since its inception in 1872, the club has won more than 50 Scottish Championships and more than 30 Scottish Cups, as well as the 1972 Cup Winners' Cup. Since 1888, they have enjoyed a fierce rivalry with Celtic, with the two clubs being traditionally referred to as the "Old Firm". 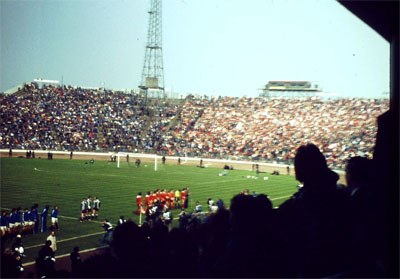 Aberdeen and Rangers before the 1978 Scottish Cup Final.

Rangers was founded in 1872, by a small group of rowing enthusiasts that regularly get together on Glasgow Green to play the game of football. While the club was originally named Glasgow Argyle, it was renamed as Rangers at one of the first club meetings to be held.

One of the first great moments in the club's history took place in the fourth edition of the Scottish Cup. Rangers advanced all the way to the final and first after a second replay could their opponent Vale of Leven claim the title. In 1886, they did their first appearance in the FA Cup (they had also been listed the previous year, but withdrawn).

The largest city in Scotland would the dominant region of Scottish football. It would also stand out by its violent crowd disorder. The first so-called brake clubs emerged in Glasgow already in the 1880s and signified the first organized supporter groups including away fans.

In 1920, the club's long-time assistant manager Bill Struth was promoted to manager; this marked the beginning of an unprecedented 34-year long period with him in charge of the club.

The early 70s were not a particularly happy period for the club due to the 1971 Ibrox disaster, when a large-scale crush led to the deaths of 66 people. Nevertheless, the following year saw the club recover from the tragedy to win their first European trophy by outlasting Dynamo Moscow 3-2 in the Cup Winners' Cup final. Not long after that, Jock Wallace took over as manager and eventually managed to halt Celtic's domestic dominance by claiming three Scottish Championships and three Scottish Cups from 1973 to 1978.

With only two Scottish Cups to their name in an 8-year period after Wallace's departure, it was high time for changes. The club returned to the spotlight with the appointment of Graeme Souness as player-manager in 1986; this hiring led to the so-called Souness Revolution, which saw Rangers acquire a number of high-profile signings. Souness – and later Walter Smith – led Rangers to nine consecutive Scottish Championships and three Scottish Cups from 1987 to 1996. Even after their departure, the club continued to ride a streak of good results, claiming seven Scottish Championships and six Scottish Cups by 2011.

Financial difficulties forcing the club to a new journey

Due to numerous financial difficulties surrounding the club, the 2011/12 season saw Rangers enter the process of liquidation. The club went on as a new company (soon renamed The Rangers Football Club Ltd), and had to start their new journey from the fourth tier of Scottish football.

Rangers logo consists of a blue ball with a red lion outlined by a circle with “Rangers Football Club” in uppercase letters. The word “Ready”, which stands for the club's motto, could also be found in the logo. There is, however, an alternative logo used on the shirt, which is based on the initials of the club's name (RFC).