In the football world, it’s hard to find a club with a more turbulent history than FCSB. Founded in 1947 as part of the Romanian Armed Forces, FCSB claimed 20 Liga I titles, 21 Romanian Cup, and one European Cup before 1998. At that point, FCSB was separated from the army, with businessman George Becali soon acquiring full ownership of the club. Since 2011, the club has been embroiled in a legal battle over its brand and honors (for that reason two records are presented under "Main trophies"). 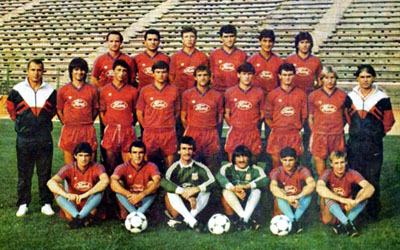 In 1947, the Romanian Royal House decided to create the first Romanian sports club of the Army. Following a few political interventions, the new club was renamed CCA. They won its first trophy in 1949 by defeating CSU Cluj 2-1 in the Romanian Cup final. This was followed by three consecutive Liga I titles and Romanian Cups at the start of the ‘50s, which saw CCA establish itself as the leading power of Romanian football.

By 1956, the Romanian national team was comprised entirely of CCA players. That same year, the club participated in a highly publicized tournament held in England, where it recorded one victory, two draws, and one defeat. In the following years, they went on to claim three more Liga I titles. They also took their first steps in Europe, getting eliminated by Borussia Dortmund in their inaugural European Cup appearance.

In 1961, the club changed its name to CSA Steaua Bucureşti. The name Steaua (a Romanian word for “star”) was chosen due to a star on the club’s crest. At first, the latest name change didn’t bring much good fortune to the club. The following two decades saw Steaua play second fiddle to rival clubs such as Dinamo Bucureşti, with whom they contested the Eternal derby. The rise of teams such as UTA Arad and Petrolul Ploiești made things even more difficult.

During this period, Steaua managed to win just three Liga I titles. However, they did claim eight Romanian Cup trophies, which led to them being nicknamed “the cup specialists.” Their fortunes started to change in the early ‘80s, when they began to transfer in young talent such as Helmuth Duckadam, Marius Lăcătuș, and Gavril Balint. Though they won no trophies for six years, these acquisitions created a foundation for what was to come.

From 1985 to 1989, Steaua dominated the domestic competitions by claiming five consecutive Liga I titles and four Romanian Cups. However, this generated reached its pinnacle 1986, when they became the first Romanian team to make it to the European Cup final. In the decider, Steaua survived against heavy favorites Barcelona for 90 minutes and won the penalty shootout. Duckadam emerged as the hero by saving all four Barça penalties.

With the acquisition of Gheorghe Hagi, Steaua remained in the top of European football until the end of the decade. After losing to Benfica in the 1988 European Cup semi-finals, they made it back to the finals in 1989. However, the Van Basten-led Milan was too strong of an opponent, and Steaua was soundly defeated 0-4. The club’s dominance ended at the start of the ‘90s, with the team’s best players leaving for other clubs in the wake of the Romanian Revolution.

Despite the premature end to their European conquests, Steaua continued to perform at the highest level in domestic competitions. They won six consecutive Liga I titles in the ‘90s before the new regulations forced them to separate from CSA Steaua, which was still controlled by the Army. The new club changed its name to FC Steaua Bucureşti, and was soon purchased by controversial businessman George Becali.

Under Becali, Steaua claimed two Liga I titles in 2005 and 2006 and reached the UEFA Cup semi-finals in 2006, where they were eliminated by Middlesbrough. In 2011, the Ministry of National Defense sued Steaua over the team’s name, logo, and honors. Since the Romanian Army was the rightful owner of the Steaua brand, the club had to change its name to FCSB in 2017. From 2013 to 2015, they won three consecutive Liga I titles and one Romanian Cup.

The latest logo of Steaua București, picture to the left, is a shield with the red and blue team colors in the background and besides that dominated of the text “Steaua” and an eagle. In some version, the text “Citius, Altius, Fortius”, Latin for "Faster, Higher, Stronger", is displayed in a banner.