Watford Football Club played in the Southern league from 1896 to 1920 before becoming a member of the Football League. They didn’t reach the first division until 1982 for the first time. The best accomplished result in the top league is a second place in 1983. In the FA Cup, they have as best been runner-up (1984 and 2019). 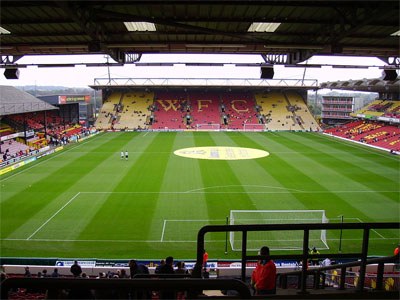 Vicarage Road, home of the Watford team since 1922.

The club was founded in 1881 as Watford Rovers. It later changed the name to West Hertfordshire in 1893 and finally to just Watford in 1898.

In 1920, they did the first season as a member of the Football League and started in the newly established third division. The fans had to wait until 1968 for a promotion to the Second Division. And in 1982, Watford did for the first time join the top flight after finishing second in the Second Division. They make their Premier League debut in 1999, but were relegated the same season.