If you were watching football in the 90s, you couldn't have missed Hristo Stoichkov. On the one hand, he was one of the most complete players of his era: powerful, creative, quick with the ball, and capable of playing at multiple positions. On the other hand, he was one of those players some loved to hate. Thanks to his roguish, aggressive nature and a do-or-die mentality, Stoichkov was always a controversial presence. 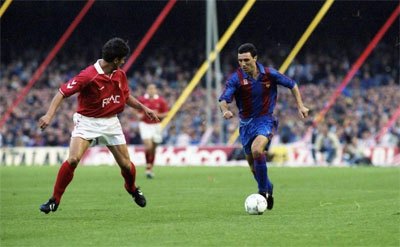 Hristo Stoichkov in the Barcelona dress.

After spending four years in the youth categories of his hometown club Maritsa Plovdiv, Stoichkov moved to Hebros Harmanli. Not long after that, he joined CSKA Sofia, where he would spend the next five seasons. Early on in his career, Stoichkov was mostly known for his short temper. During his first season with CSKA, he sparked a mass-brawl on the pitch, which caused him to get suspended for a year.

Still, his talent was undeniable. He continued to improve in every season he spent with CSKA, eventually winning the European Golden Boot by scoring 38 goals in his 30 appearances during the 1989/90 season. By then, it was clear that the emotional Bulgarian wonder-kid was the real deal. At the end of the season, he accepted Johan Cruyff's offer and moved to Barcelona.

Under Cruyff, Stoichkov blossomed into one of the best strikers in the world. Playing alongside Romario and the other members of the "Dream Team," Stoichkov scored 76 goals in 151 appearances and led Barcelona to four consecutive La Ligas. In 1992, he enjoyed his best season at the club level, which saw him win a European Cup and get nominated for Ballon d'Or.

Despite these achievements, Stoichkov is for some mostly remembered for his performance at the 1994 World Cup. After losing 3-0 to Nigeria in the opening round, Bulgaria's hopes of moving on looked slim. However, Stoichkov didn't agree. After scoring at least a goal in each of the following five games, he led his national team to the semi-finals, where they were dispatched 2-1 by Italy. He finished the tournament with 6 goals, winning both the Golden Boot (along with Oleg Salenko) and his only Ballon d'Or.

Though Stoichkov continued to perform well at the international level, Bulgaria never reached those highs again. At the Euro 1996, they were eliminated in the first round despite 3 goals from Stoichkov. Shortly after a first-round elimination at the 1998 World Cup, Stoichkov retired from the national team with 37 goals in 83 matches.

At the age of 29, Stoichkov left Barcelona and became somewhat of a journeyman. After a short stint in Parma and a return to Barcelona, he went on to play for Al-Nassr, Kashiwa Reysol, Chicago Fire, and D.C. United. Not long after he finished his playing career, Stoichkov stepped into managerial waters, serving as head coach of Bulgaria from 2004 to 2007.

In addition to being the greatest Bulgarian football player of all time, Stoichkov is regarded as one of the best strikers of his generation. Interestingly enough, given his temperamental nature, he was almost unnaturally calm in front of goal. Whenever he'd find himself in a goal-scoring opportunity, Stoichkov managed to find his inner peace and focus on the ball and the goal. Very few players in the history of football were capable of that -- Stoichkov was one of them.