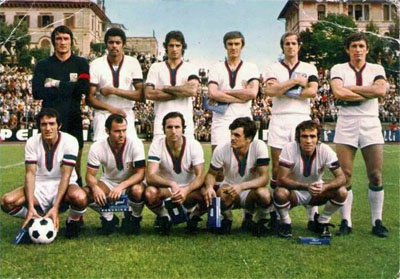 The first decade of its existence, Cagliari Calcio participated in regional competitions before joining the Italian league in 1929-30 season as a member of Prima Divisione D.

The best period for Cagliari was during the second half of the 1960s and the first years of the 1970s. One reason was the striker Luigi Riva who made 164 goals for the team between 1963 and 1976.

After the Serie A victory in in 1969, they competed in the European Cup for the first time. They advance from the first round by defeating AS Saint-Étienne, but was eliminated by Atlético Madrid in the next round. The deepest run in an UEFA competition happened in the 1993-94 season of the UEFA Cup when Cagliari reached the semi-finals.