Juventus FC, also informally known as Juve, is since long one of the top ranking Italian football clubs and located in Torino. The Italian word Juventus means “youth”. The club also goes by several nicknames in its native Italy: “The Old Lady”, “The Girlfriend of Italy”, “Madam”, “The White-Blacks”, “The Zebras” and even “Hunchback.” 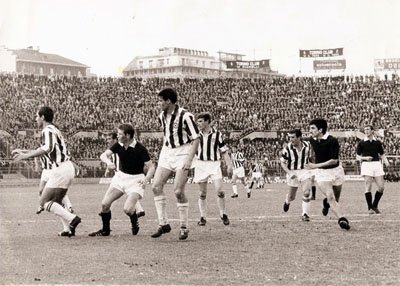 In the 19th century Turin was a small town until the start of factories in the 1870s. As a result of the wealth of local merchants the first Turin football club, Juventus, was established at the end of the century. At its establishment, on 1 November 1897, it was called Sport-Club Juventus.

The black and white strips, that today is primarily associated more with Juventus than any other football club, actually has its background in England and one of the first football clubs, Notts County. At the beginning of the 20th century, when the team needed to replace the washed out pink shirts, one of their English players was asked to arrange something from his home country. The shirts that arrive were Notts County replicas.

In the 1950s and 1960s the foremost company was Fiat and people from the poor southern Italy were moving in masses to Turin for the work opportunities. Turin became an industrial town and that circumstance has historically matched well with football success for the local teams.

A short and controversial hiatus of the Serie A domination

Juventus has managed to spend most of its history in the Serie A, with the notable exception being the 2006-07 season. Due to the Calciopoli scandal, Juventus two scudettos concerning 2005 and 2006 were revoked and the team was sent down to Serie B. Despite a nine points reduction, Juventus bounced back to Serie A and were soon the dominant force in the top-flight again.

In the 2010s, Juventus have dominated Italian club football in a way that is unparalleled. They have won every scudetto from season 2011–12 until the end of the decade. A demonstration of their superiority was marked by the 102 points collected in the 2004–2005 season, which is a record (the structure has, however, shifted concerning the numbers of teams and points awarded for a win).

The list of football legends who have played for Juventus is quite extensive. In recent years players such as forwards Alvaro Morata and Paul Pogba are some of the world-class football players. In earlier years, the club has also been home to football legends such as Michel Platini, Zinedine Zidane, Alessandro Del Piero and Cristiano Ronaldo.

Juventus have for the most time been rather consitent regarding the logo. In 2004 the logo was redesign, but only with slight changes (right image). The black and white strips of the team shirt could be seen on the crest as well. Just above the middle in the crest the name of the club is written and below that a crown and a shield with a drawing of a stallion. Juventus was also the first club in football to adopt a gold colored start above the crest. The star was used as a sign for ten league titles. Being the winner of over 30 Scudettos, Juventus could claim three stars as an extension of the logo. In 2017, Juventus adopted a new logo in modernistic style (left image), which was very apart from the traditional crest.