Serie A (Lega Nazionale Professionisti Serie A) is the name of the top Italian football league and has existed since 1898 and since 1929 as structured today. Since 1961, the winner gets the trophy called Coppa Campioni d'Italia. When the league was established it included 18 clubs, but since when it has decreased and expanded many times: from 16 as minimum to 21 clubs as maximum (since the 2004-2005 season, 20 clubs has been included). Today the division is also referred to Lega Serie A, or more commonly only Serie A.

An Italian National Championship was decided already in 1898 and Genoa Cricket & Athletic Club became the first champions, although the whole competition was decided upon one match.

For some more than two decades, the competition was divided into regional groups. During the period 1922-1929 different arrangement was tried until several interregional divisions was merging into one. At this time was also Serie B, the second highest division introduced. This coincided with a period in Italian football when the leading Fascist party dictated that no foreigners were allowed in the football league. This was counterweighed to a high degree by the import of Italian ancestries, so-called rimpatriato, from South America.

In 1964, the league became the Lega Serie A when the Lega Calcio was founded in replace of Italian Federal Football Association.

Scudetti, which is Italian for “little shield” has since the 1924 been a shield (i.e. logo) been awarded to the winner to wear on the shirt. The team winning the Serie A is often referred to “winning the scudetto”.

Serie A is the top level of the Italian football league system. The second division was founded in 1929 and is known as Serie B. Some years later a third tier, Serie C was founded. An overview of the current national league system is presented in table 1.

Below the third tier the league is played on semi- or non-professional levels with regional divisions.

The top three teams in Seria A are qualified for the Champions League (one place also goes to the winner of the Coppa Italia) and the teams that are placed 3-6 will also get the chance to play in European Cups.

Statistics of all Italian clubs that have won the top division, concerning the period 1929-2020.

In addition, Juventus won the league in season 2004-05, but the title was later revoked.

Notice that seasons before the establishment of Serie A in 1929 is also included. Genoa CFC for example, won all their titles before 1929.

Teams with most Serie A participation

Statistics of the Italian clubs that have participated more than 50 times in Serie A during the period 1929-2020.

Between the first season and the last, in total 67 clubs have participated in top division of the Spanish league.

Overview of the number of teams that have participated from season to season.

Capacity of Serie A stadiums

The capacity of the teams participating in Serie A is shown i table 5. San Siro, where both Internazionale and Milan plays, has the highest capacity with over 80,00 seats. The average capacity in the league is 39,410.

The league's all-time leading goalscorer is Silvio Piola who played in Cagliari Calcio and who's career lasted from 1929 to 1952. In thís period he scored 274 times in Serie A. 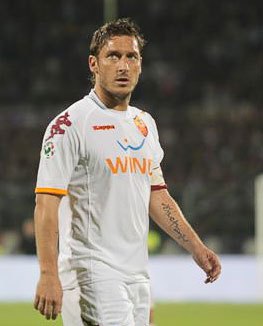 Other notable goalscorer in the league are Gunnar Nordahl, José Altafini, Giuseppe Meazza, Antonio Di Natale and Roberto Baggio. They all scored over 200 times.

Players with most appearances

The player with most appearances is the defender Paulo Maldini who played for Milan between 1984 and 2009 and was recorded for 647 matches. As writing, the goalkeeper Gianluigi Buffon is still active and will probably take over the record from Maldini in a relative near future. Buffon has 644 appearances in November 2019.

There are four players with more than 600 appearances in Serie A, the other two besides Maldini and Buffon are Francesco Totti and Javier Zanetti. Zanetti holds the record with most games among foreign players.