While Leicester City does not have as colorful a history as some of their Midlands rivals, the club can boast of spending only a single season outside the top two divisions of English football. They have won several Second Division titles and three League Cups, and being responsible for finishing first in the Premier League against all odds in 2016. Leicester is known for their long-standing rivalry with Nottingham Forest, a feature usually referred to as the East Midlands derby. In the club's past, two of England’s most legendary goalkeepers, Gordon Banks and Peter Shilton, have been protecting the net.

The club was founded in 1884, under the name of Leicester Fosse ("Fosse" was an old Roman thoroughfare in Britain) by former pupils of Wygesston School. Leicester switched five different grounds before finally settling on Filbert Street in 1891, a stadium which would be their home for the next 111 years.

Leicester became a member of the Football League in 1894 and after a couple of mediocre seasons in Second Division, they earned promotion to the First Division in 1908; however, their first season in the top flight proved to be a disaster. In addition to being relegated immediately, this season would leave a bad taste in the fans' mouth due to a 12-0 thrashing at the hands of Nottingham Forest, which remains the club's biggest defeat of all time.

The club being reformed as Leicester City

Due to a financial scandal, the club was reformed as Leicester City in 1919. Led by Arthur Chandler, the club's top goalscorer of all time (with 273 goals in 393 appearances), Leicester returned to the First Division in 1925 and finished as runners-up to Sheffield Wednesday by a single point in 1929.

The club would not start capturing the headlines again until Matt Gillies' appointment as coach in 1958. Gillies' keen eye for talent was a crucial part in forming a team that would go on to reach two FA Cup finals (1961, 1963) and a fourth-place finish in the First Division (1963). They would only have to wait one more year to claim their first trophy: the 1964 League Cup. After Gillies' resignation in 1968, Leicester would spend only a single year in the top flight before being relegated to the Second Division once again.

After decades of yo-yoing between the top two divisions, Leicester City won two more League Cups in 1997 and 2000; still, this taste of silverware did little to turn the club's luck around. After spending a lot of money on some historically bad transfer signings, Leicester quickly found themselves in the Championship again, where they remained until 2008 until another relegation, this time to League One. This would prove to be their only season in the competition, however; under the new coach, Nigel Pearson, Leicester returned to the Championship the very next year. 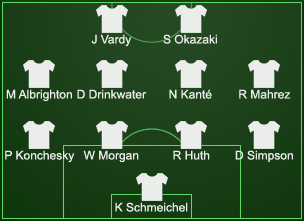 Leicester line up in Premier League 14/15 v. Man U

In 2016 Leicester chocked a whole football world by a remarkable performance in the Premier League. Under the management of Claudio Ranieri, the team hit the big time and won the top league for the first time.

In the center of the logo the teams mascot ”Filbert Fox” is visible in yellow color. Similar designs of the current version have been used since 1992. Before that the crest was in the shape of a shield instead of a circle and the fox was displayed differently.

1884 The club is established as Leicester Fosse.
1884 The club play its first match against Syston Fosse.
1894 Member of the Football League.
1903 The team change to a blue and white kit.
1908 First season in Division 1.
1919 The club is rebranded as Leicester City Football Club.
1964 First League Cup title.
2006 The club move to the King Power Stadium.
2016 First time national league champions.
2021 Winning their first FA Cup title.

References:
https://www.lcfc.com/club/history/potted
https://en.wikipedia.org/wiki/Leicester_City_FC
The Ball is Round: A Global History of Football – David Goldblatt (2008)
https://thebeautifulhistory.wordpress.com/clubs/leicester-city/