Manchester United is one of the most prestigious football clubs and has always maintained a distinguished tradition, a record of consistent success, and a great history. They are together with Liverpool, England's most successful football clubs ever. "The Red Devils" have more national titles than Liverpool, but the rival has collected more titles in international tournaments. 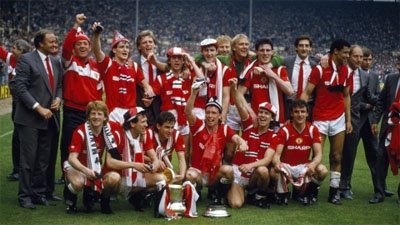 Celebration after FA Cup victory in 1983.

Manchester was one of the fastest growing cities during the Industrial Revolution and much so due to a torrent of workers arriving from different parts of the British Islands. From a relatively small town in the beginning of the 19th century, Manchester had passed one million inhabits by 1900 and had become one of the biggest cities in Europe. It was great conditions for football clubs to emerge; the sport was after all, in its early history to a big degree dominated by workers. The club that later would become Manchester United FC was initially founded in the year 1878, named as Newton Heath L&YR Football Club. L&YR as in Lancashire and Yorkshire Railway Company, which were the company there the team's player worked.

The team played in the Football League for the very first time in 1892 (they should not be confused with Manchester Football Club, founded in 1860 and participated in the FA Cup in the 1870s before shifting to Rugby). But, they were relegated after two years. Next, a new group of local businessmen then took over the roles and responsibilities of the club and named it as Manchester United in 1902. The newly named club won the title of English League in 1908 under the guidance of Ernest Mangnall. The first FA Cup trophy was obtained the following year. The team then shifted to the current stadium, Old Trafford in 1910.

After the Second World War, the club had witnessed an extended spell with the appointment of Matt Busby in 1945. This visionary leader completely reshaped the club and placed a new faith in youngsters, and this strategy eventually proved to be astonishingly successful.

The United team would win the league in 1955–56 and 1956–57. The average age were 21 at the first occasion, which made it the youngest side ever to win the Football League and earned them the nickname the “Busby Babes”.

One day in 1958 is especially marked in dark colors for the in the history of Manchester United. After a game against Red Star Belgrade in European Cup the United team was flying back to England then disaster struck. After a refuel in Munich the plane crash at the start and eight players and three members of the staff died. But the coach survived the plane crash and he eventually built another great side that won many championship trophies and witnessed poignant victories over the time.

After that, the team played under Tommy Docherty, who was even more conducive to success. Nevertheless, in 1977 Docherty was replaced by Dave Sexton, who was more cautious. In 1981, he was replaced by Ron Atkinson. 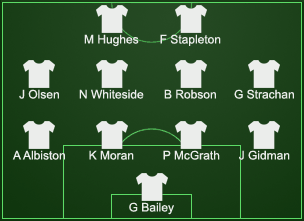 The club appointed Alex Ferguson as manager in the year 1986. Though it can be pretty hard to believe, however, the first years of Ferguson's coaching were extremely difficult until the team won a victory in the FA Cup in 1990. Over the next twenty years, the club won at least 25 major trophies, including around eleven League titles.

Manchester United won the first Double in the year of 1994. Next, it became the first English club to win a Treble while winning the FA Cup, the Premier League, and UEFA Champions League simultaneously during 1998-1999. The team continued the fabulous upswing by beating Palmeiras to become the club world champions. 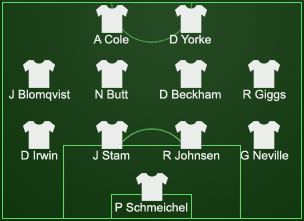 United won three consecutive league titles during the period 1999-2001. One of the most astonishing records is from the 1999/2000 season then they won the league with a 18 points margin.

Between 2003 and 2005, the American businessman Malcolm Glazer bought enough shares to become the new owner of the Manchester club. The new ownership was remarkable unpopular among the fans. But despite the controversial turmoil after the takeover of the Glazer family, the team continued to grow as a great team while maintaining its esteemed tradition and having a huge international follower base. During 2013-2014, it was recognized as the 2nd highest-earning club across the world with an estimated revenue of around €518 million. In fact, it was further named as the third most valuable football club in 2015.

The club has been clever in marketing its brand in many fields. Manchester United have been the most successful soccer team in the world to earn money from brand-name products, which have earned them the not so flattering nickname "Merchandise United".

When Alex Ferguson departed permanently from the post he had 1986-2013 the team's result would decline. None of David Moyes, Ryan Giggs and the reputable Louis van Gaal, in the manager role, could repeat the successful Ferguson formula.

For the 2016/2017 season José Mourinho was appointed a manager with three years contract. This was a state of the club's ambition to continue to expand its capacity, maintain its on-field success and unbeatable winning record and hold its royal legacy.

The upper part of the inner shield of the Manchester United crest displays a ship that actually originates from the Manchester City Council coat of arms (a ship can likewise be found on Manchester City’s logo). Below the ship, there is a bigger drawing depicting a devil – the devil was first incorporated on the crest in 1970. A minor change was done in 1998 when "Football Club" was removed from the bottom banner. Instead, the banners only text out "Manchester United".