The Premier League began in 1992 preceded by the First Division of the Football League that was founded in 1888. Today it holds the status of the best football league in the world. Even though the top clubs in England don’t win the biggest European Cups with same frequency as the top clubs in Spain, the Premier League is still considered to contain the toughest competition overall. (Premier League was earlier sponsored by Barclays Bank, thus the reason for its previous official name Barclays Premier League.)

The background of the Premier League was a bleak period for English club football. The attendances were record low and the league were notorious for hooligans. In the 1985-86, the league started without a TV coverage since the parts couldn't agree upon a deal. At this time, the biggest clubs in the country began discussions about launching a new independent league.

The establishment of the Premier League meant a historical divide of the top-level division from the Football League. The new league would not be part of the Football League, with traditions going back to the 1880s. Yet, it would continue to be a part of the league system – the worst placed teams in the Premier League would be relegated to the second level and the best placed teams would vice versa be promoted from the second level to Premier League.

New contracts were made with television companies that understood the potential of the game’s popularity. Sky was given the TV rights and they expanded the program to five-hours sessions. The concept were highly influenced by the American NFL broadcasting, features such as Monday Night Football was introduced for the TV audience.

Premier League is since the 1992-1993 season the top tier of the English football league system (before that Division One had the same function). The next three tiers are incorporated in the so-called English Football League (EFL). When follows two additional tiers, which are part of the National League. An overview of the current league system in England is presented in table 1.

Statistics of all English clubs that have won the Premier League, concerning the period 1993-2022.

This is only based on the seasons after the league changed name, see Clubs and English Football League titles. If all seasons going back to the year 1888 would be included the list would look different. Manchester United would still be on top with 20 titles, but Liverpool would come as the second best with 18 titles.

All winners since first season including collected points per season by the winner.

The league consists of 20 teams (except the three first seasons in which 22 teams were included), which meet each other two times (home and away) per season; 380 games are played in total. Most points by a team in a season, 100 (2.6 per match), were collected by Manchester City in the 2017-18 season.

Statistics of all English clubs that have won the Football League, including Premier League, with number of titles and the first winning season concerning the period 1888-2020.

In total, 24 clubs have been English league champions.

Soon after the start of Premier League, the terraces for standing were forbidden and instead the whole audience was to sit down to watch the games.

Table 4 shows the capacity of all Premier League club stadiums (based on the teams that participated in the league season 2016–2017). Manchester United's Old Trafford is the biggest in the league with capacity for over 70,000 people.

To put the capacity in relation to the actual audience per match we could take Manchester United as an example. During the 2015/2016 season the average attendance was 75,279. The tickets are mostly sold in season package, but for comparison, a match-day ticket in season 2015/2016 would cost from £22 (Leicester) to £52 (Chelsea).

The matches in Premier League are well sought after and the big stadiums are regularly full or almost at the competition. The diagram below shows aggregate attendance at games over seven seasons. 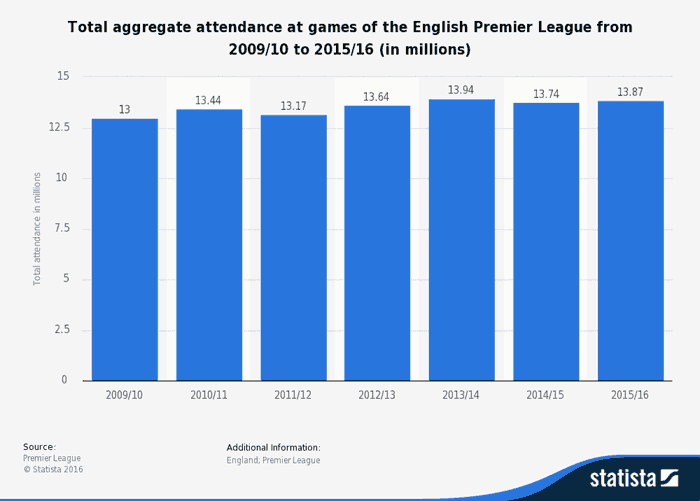 Premier League is a league with lots of money involved. The television contracts are extremely expensive and result in big revenues for the association and the clubs. The matches are broadcasted in more than 180 countries. The gap of revenues is huge between Premier League and the EFL Championship (within the 15 years following the initiation of Premier League, the collective revenues for the clubs would grow over 1000%).

The broadcast payments are divided into three parts: 1) Equal share payments – the biggest part which all teams get in the same size; 2) Facility fees – payment for a club being featured in a live match; 3) Merit payments – based on performance.

The money is also generated by ticket sales to the matches and the prices has increased significantly during the Premier League era.

The rise of the Premier League made its members rich and foreign players and managers were imported in a scale never seen before in England. It would forever change the character of the game in the league.

The kit sponsorship revenues from the Premier Legues is enormous and expected to be over €100 million per year. The diagram below shows the total revenues of the Premier League clubs in 2014/2015 (in million pounds). 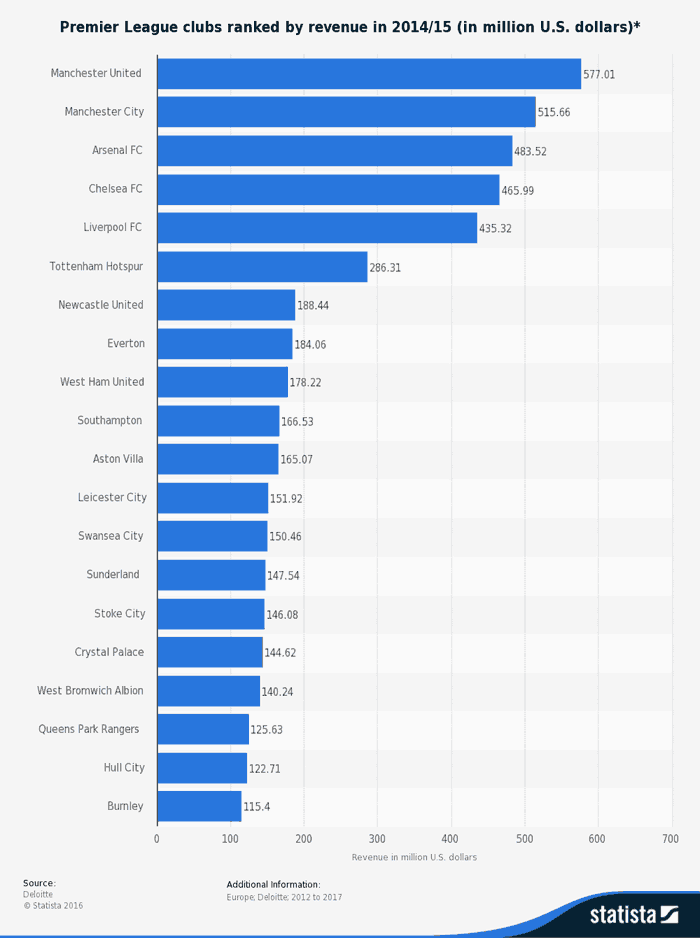 Millions of pounds are involved in buying and selling players. The diagram below shows the total spending of Premier League clubs in the January transfer window from 2006 to 2016 (in million pounds). 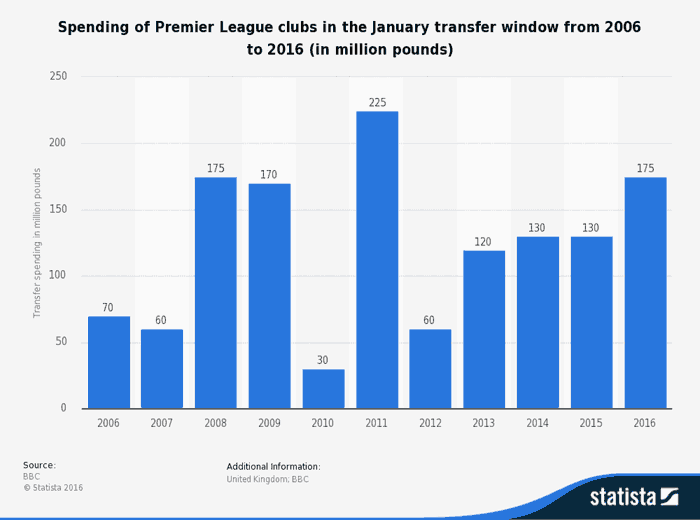 The Premier League has four places in the Champions League and one place in Europa League (winners of the FA Cup and the Capital One Cup also qualify for the Europa League).

The three teams placed at the bottom of the table (places 18-20) will be relegated to EFL Championship, the second level.