Despite not being in the top of European football for a while, Hungary's national team has a glorious history. In the post-WWII era, Hungary established itself as the team to beat, going on a four-year unbeaten streak that lasted 31 games. This team became known as the Mighty Magyars, and it’s still considered by many to be one of the greatest national sides in the history of football. Hungary has two second-place World Cup finishes (1938 and 1954). 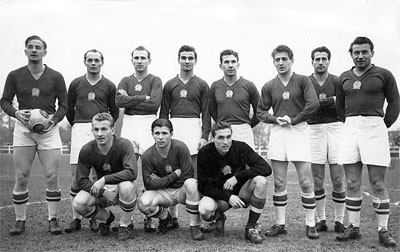 The Hungarian Football Federation was founded in 1901. Though Hungary was part of the Austro-Hungarian Empire at the time, both countries decided to form separate associations. The Hungarian team’s first showing at a major tournament arrived in 1912, where they were trounced by England 0-7. Following this loss, Hungary played two friendly matches against Russia, winning them both 9-0 and 12-0.

After another unsuccessful showing at the 1924 Olympics, Hungary participated at its first World Cup in 1934. They defeated Egypt 4-2 in their debut, but were then eliminated by neighbors Austria 1-2 in the quarter-finals. Four years later, a much improved Hungary squad defeated Dutch East Indies, Switzerland, and Sweden on the way to the country’s first World Cup finals. However, they were no match for Italy, losing the match 2-4. 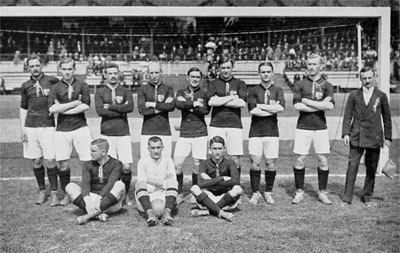 The national football team at the 1912 Summer Olympics.
Advertisement

With WWII resetting the football hierarchy, Hungary pulled out in front of the pack with one of the most influential teams in the history of the game. This team was characterized by the silky ball skills and the dynamic link-up play by its legendary quartet of strikers: Ferenc Puskás, Sándor Kocsis, Nándor Hidegkuti, and József Bozsik. This team went undefeated from 1950 to 1954, recording a streak of 31 games without a loss (that included winning the 1948-1953 Central European International Cup).

In 1953, the Mighty Magyars became the first team to defeat England at Wembley. Furthermore, they did so in dominant fashion, winning the match 6-3 and hiding the ball for the final 30 minutes of the game. Once they’ve won the rematch 7-1, they cemented themselves as the number one favorite at the upcoming 1954 World Cup. The first round of the tournament went swimmingly, as they thrashed South Korea (9-0) and West Germany (8-3).

In the quarter-finals, Hungary had to go over Brazil. In a match later referred to as the Battle of Berne due to its violent reputation, the Mighty Magyars prevailed 4-2. They then needed the extra time to beat Uruguay, with Kocsis scoring a brace to set the final score at 4-2. The finals brought a rematch with West Germany, but the result was vastly different. Though Hungary led 2-0 early on, the Germans overcame the deficit and ultimately triumphed 3-2.

Though their four-year streak was finally broken, Hungary remained a respectable footballing nation. In 1958, they failed to advance past the group stage after a surprise draw with Wales. They did slightly better in 1962, as they defeated England and Bulgaria to make the quarter-finals, where they lost to Czechoslovakia in a 0-1 thriller. Two years later, they qualified for the inaugural European Championship, finishing third.

The 1966 World Cup was something of a swan song for the Hungarian national team. After losing to Eusebio’s Portugal, they recorded key victories against Brazil and Bulgaria to qualify for the quarter-finals, where they were defeated by the Soviet Union. They participated at three more World Cups in the following years, but never managed to get past the group stage. They also qualified for the 1972 Euro, where they again managed to grab third place.

Following the 1986 World Cup, Hungary entered a dark age. The fall of the Communist regime in 1989 caused financial issues for most Hungarian clubs, which in turn harmed the national team. Soon enough, they found themselves relegated to the margins of European football, reaching their lowest FIFA ranking in 1996 (87th). From 1990 to 2014, they failed to qualify for any major international tournaments.

This streak was finally broken in 2016, with Hungary qualifying for the Euro 2016. A victory against Austria and two draws against Portugal and Iceland were enough to claim first place in their group, which saw them pitted against Belgium in the round of 16. Despite keeping it a close game for most of the duration, they eventually succumbed to Belgium’s attackers and were defeated 0-4.

Hungary has participated nine times in the World Cup.

Hungary have participated three times in the European Championship (Euro).

The logo has a crown in the upper part and below two additional parts. The left part with red and white stripes and the right part with a white double cross against a red background goes both back to mediaeval heraldic symbols.