Considering their immense success in recent history, it may surprise you to hear that Portugal wasn’t always a football powerhouse. Out of the 16 World Cups organized during the 20th century, Portugal only qualified for two. With the arrival of the golden generation in the mid-90s, however, things took a promising turn. From that point onwards, the team continued to improve on a regular basis, a process which eventually culminated in their victory at the Euro 2016. 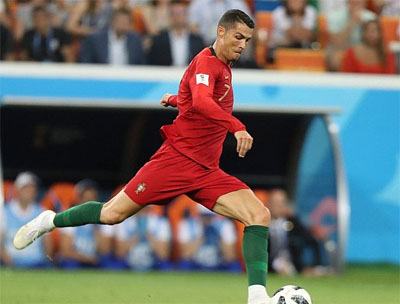 Cristiano Ronaldo in the national dress in 2018.

The football federation of Portugal was founded in 1914. The official name of the federation was União Portuguesa de Futebol, and their main goal was to promote national tournaments. Unfortunately, the WWI outbreak stopped those plans in their tracks for seven years. As a result, Portugal played its first official game in 1921, losing to Spain 3-1. The following year saw the founding of the Campeonato de Portugal, which set things off in the right direction.

Portugal first tournament were the 1928 Olympics, where they bowed out in the quarter-finals after a 2-1 loss to Egypt. Despite a solid showing, they didn’t manage to capitalize on it. After missing an invitation to the 1930 World Cup, they were humiliated in the 1934 qualifiers by losing 9-0 to Spain. The 1938 qualifiers saw the team face off against Switzerland, losing 2-1. Due to the WWII, they would have to wait 12 years for their next chance.

Stumbling in the dark

Portugal continued to take part in the World Cup qualifiers throughout the ‘50s without much success. The 1950 qualifiers pitted them against old rivals Spain, which resulted in a 5-1 defeat in Madrid. They did even worse four years later, losing to Austria in a humiliating 9-1 fashion. The 1958 qualifiers saw the team record their first victory in the competition (3-0 against Italy), but their World Cup hopes were dashed by a defeat to Northern Ireland.

From 1960 onward, Portugal was able to compete in the European Championship qualifiers as well. Their first two attempts to qualify to the final tournament were unsuccessful, as the team lost to Yugoslavia in 1960 and Bulgaria in 1964. Meanwhile, the 1962 World Cup qualifiers saw them finish second in their group, behind England. After a promising 6-0 victory over Luxembourg and a 1-1 draw against England, they lost both of the following away matches.

As disheartening as most of these defeats were, Portuguese fans knew that something big was on the horizon. For starters, the Benfica squad that won back-to-back European Cups in 1961 and 1962 became the lynchpin of the national team. Led by Brazilian coach Otto Glória, this team finally broke the “curse” and qualified for the 1966 World Cup. They were colloquially known as Os Magriços, after a 15th-century poem about twelve chivalrous Portuguese knights.

The leader of the Os Magriços was the 24-year-old Eusébio, another member of the Benfica team that won the European Cups. In his prime, Eusébio was unquestionably one of the greatest strikers of his era, perhaps second only to Pelé. He proved his mettle at the tournament as well, leading Portugal to three straight victories in the group stage. The final victory came against two-time defending champions Brazil, with Eusébio scoring a brace.

Despite North Korea giving them a scare in the quarter-finals, Portugal managed to overturn a 0-3 deficit with 4 goals from Eusébio. They then lost their semi-final match against eventual champions England, but only after being forced to make an unexpected trip from Liverpool to London. They finished the World Cup on a positive note, defeating the Soviet Union 2-1 in the third-place match. With nine goals, Eusébio was the top scorer of the tournament.

Following their best World Cup finish to date, Portugal went back to the qualifiers purgatory. Surprisingly, they failed to make any of the World Cups and European Championships held between 1968 and 1982. Most of these qualifying groups only had the top team advance to the final tournament, with Portugal routinely finishing in second place.

Portugal’s lone bright spot during this testing period was the 1972 Brazilian Independence Cup. This tournament was held in honor of the 150th birthday of Brazil receiving its independence from Portugal, with many of the best national teams in the world getting an invitation. Portugal won both of its group stages, qualifying for the finals against Brazil. In a closely contested match, the hosts ran away with the victory on the 89th minute goal by Jairzinho.

The team made its first European Championship in 1984 following a dramatic 1-0 victory over the Soviet Union. With those 3 points, Portugal clinched the first place in its qualifying group. Their good form continued at the tournament itself, as they made it to the knockout stages after a close victory over Romania. They lost the semi-final match to hosts and eventual champions France, with Platini scoring the winner in the 119th minute.

After 20 years and four unsuccessful attempts, Portugal managed to make the 1986 World Cup. The expectations were high, especially since they managed to knock out West Germany on their way to the World Cup. After a promising 1-0 victory over England, however, Portugal lost their two remaining matches and exited the tournament. Their participation was mired in a series of controversies, including doping suspicions and inappropriate behavior.

The following period didn’t offer much in the way of comfort for Portuguese fans, as the team missed out on four consecutive major tournaments. By the mid-90s, however, a group of youngsters started taking matters into their own hands. This generation -- led by Vitor Baía, Rui Costa, João Pinto, and Luis Figo -- had won two U-20 World Cups, accomplished the national team's best result in the Olympics (4th place) and many of them were already stars in club football.

Their first taste of success arrived in 1996, when they managed to top their Euro group ahead of Croatia, Denmark, and Turkey. They went on to lose the quarter-finals against the Czech Republic, but the first impression was undoubtedly a positive one. At the Euro 2000, they went one step further by making it to the semi-finals. They were then eliminated by a golden goal from Zinedine Zidane, which was scored from a controversial penalty kick.

Despite the heartbreaking loss, the golden generation continued to make their mark at major tournaments. After a short appearance at the 2002 World Cup, they went on to make the Euro 2004 finals, where they lost 1-0 to underdogs Greece. The 2006 World Cup was the team’s swan song, as they recorded five straight victories to reach the semi-finals, where they lost 0-1 to France. In the bronze medal match, Germany outlasted them 3-1.

By this point, all the members of the golden generation had retired from the national team. Due to the emergence of the young superstar Cristiano Ronaldo, however, this didn’t have much of an impact on the team’s success. Ronaldo was already a key part of the 2006 World Cup squad, and it didn’t take too long for him to become Portugal’s main man.

Throughout Ronaldo’s reign, Portugal was considered a perennial dark horse at most tournaments they played in. At the Euro 2008, they sailed out of their group only to be knocked out by Germany in the quarter-finals. The 2010 World Cup followed a similar trajectory, as Portugal were defeated by eventual champions Spain in the round of 16. Four years later, they failed to advance from a tough group containing Germany, USA, and Ghana.

Portugal’s best showing during this period arrived at the Euro 2012. Following a close 0-1 loss to Germany, they managed to defeat Denmark and overturn a deficit against the Netherlands, qualifying for the knockout stages. After getting revenge on the Czech Republic, they were set to play their semi-final match against Spain. Once again, their old rivals came out victorious; after a goalless 120 minutes, Spain won 4-2 on penalty kicks.

Compared to some of the previous tournaments, Portugal didn’t seem particularly well-equipped for the Euro 2016. After losing their opening qualifying game to Albania, they went on to win the rest of their matches by a single goal. They continued to hang on by a thread at the tournament proper, as they drew all three games in their group. In the round of 16, they defeated Croatia in extra time on the 117th minute Quaresma decider.

The quarter-finals match against Poland didn’t start out well for them either, as they went behind in the 2nd minute. They managed to stabilize on a Renato Sanches equalizer in the 33rd minute, eventually outlasting their opponents 5-3 on penalties. The semi-final match saw Portugal play their best game in the tournament, defeating Wales 2-0. The final match against France was another nailbiter, with Portugal prevailing on an Eder goal in extra time.

Following this historic success, Portugal went on to qualify for the 2018 World Cup. Their opening match against Spain proved to be one of the best games of the tournament, as Ronaldo scored a hat-trick to force a 3-3 draw. Despite having little trouble to exit their group, they were unable to get past Uruguay in the round of 16. 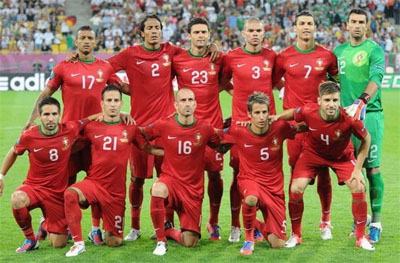 Portugal have participated eight times in the European Championship (Euro).

The middle section of the logo contains five blue shields with white dots, which also can be seen on the national flag and refer to the five wounds of Christ. The initials F.P.F. in the upper middle part of the logo is standing for "Federação Portuguesa de Futebol" (The Portuguese Football Federation).