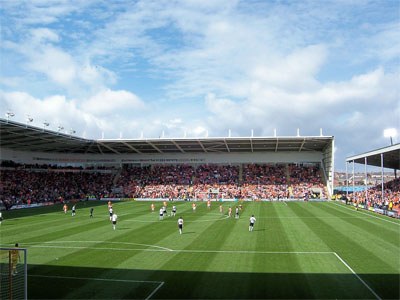 Blackpool Football Club was founded in 1887 by former students of St John‘s School. Two years later, the other football club in town, South Shore FC, was merged into Blackpool.

After two missed applies for the Football League, Blackpool was elected to the Second Division for the 1896-97 season. After a placing 16th in their third season they failed to be re-elected, and missed a season before being re-elected again. After being division champions in 1929-30 season, they were promoted to the top division for the first time.

Some of the biggest profiles in the history of the club are Jackie Mudie, Stan Mortensen and Stanley Matthews.

Note 1. The 1939-40 season was abandoned after three rounds and is therefore excluded.
Note 2. After failed re-election after the 1898-99 season, Blackpool was elected again for the 1900-01 season.