Boca Juniors are together with River Plate the two most successful Argentine football clubs. In their over hundred years long history they have won the top domestic league more than 30 times and also both Copa Libertadores and Intercontinental Cup several times. Some of the most legendary Argentine players, including Diego Maradona, Claudio Caniggia, Juan Román Riquelme and Carlos Tévez, has been playing in the classic blue and yellow kit. 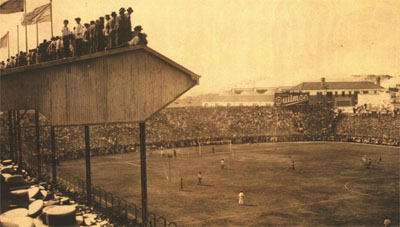 Boca playing at their home stadium in 1929.

Their first kits were without doubt inspired by the Italian team Juventus. Eight years later, Boca began to play in their famous blue shirts with the horizontal yellow band – inspired by the Swedish vessel Drottning Sophia that guested the port of Buenos Aires with a Swedish flag.

The blue and yellow kit was adopted the same year they became a member of the Primera División after it had been expanded from 6 to 15 teams. It when took the team six years to win the highest national league. They would follow up the domestic victory by beating the Uruguay champions in Copa de Competencia Chevallier Boutell (the last edition of the tournament that was ever held).

In 1939, Eduardo Sánchez Terrero, married to Argentina president Agustín Pedro Justo’s daughter, become the club president. During his presidency Estadio Camilo Cichero, later known as Estadio Alberto J. Armando, was built and it opened in 1940. The stadium would be overhauled two times in the following years to expand its capacity and after a third tier was completed it earned the nicknamed La Bombera (The Chocolate Box in English).

Boca Juniors won the top-league four times in the 1920s and has ever since been the most respected Argentine club in football alongside River Plate. Boca would in addition be honored as “Argentine Champion” five times through the Copa Ibarguren (only Racing won as many times), which was a tournament contested between the winners of Primera División and Liga Rosarina (alternatively Litoral league or Copa Presidente) between 1913 and 1958. 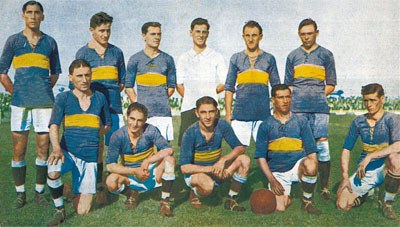 In 1963, they almost became the first Argentine side to win the Copa Libertadores. They reach the final there they faced the strong Santos led by Pelé in a two-legged match and lost 5-3 in aggregation.

Boca Juniors finally got their satisfaction in 1977. They were once again facing a Brazilian team in the final, this time Cruzeiro. After winning 1-0 at home and losing 0-1 away, a rematch on neutral ground in Montevideo would go all the way to penalties. The fifth penalty taker for Cruzeiro missed and Boca had finally won the prestigious competition. And why don’t do it again the following year? In the 1978 Boca claimed their second Copa Libertadores after defeating the Colombian side Deportivo Cali with a comfortable 4-0 over two matches. 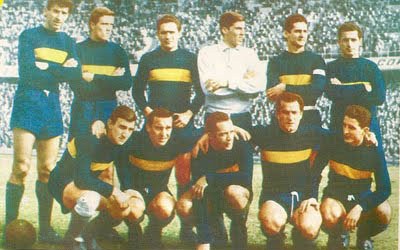 The twenty years old Diego Maradona was transferred to Boca from Argentinos Juniors in 1981. Boca Juniors had been Diego’s favorite team and he went for Boca although River Plate offered a more lucrative deal.

In his first season as a Boca player Maradona were part of a team that was crushing River Plate by 3-0 at La Bombera and winning the Primera División Metropolitano. But the club’s economy was catastrophically bad and Boca couldn’t pay the next installment of the Maradona transfer. It was impossible to keep the "El Pibe de Oro" in the team and he was sold to Barcelona (Maradona would return to Boca in 1995 and end his playing career in the club).

The economic struggle had just begun though. The player wages could not be paid and the players threatened with a strike. A bankruptcy seemed impending. In the end, they were saved by money from the president Antonio Alegre and his deputy Carlos Heller, who were investing their own money. Also, the sport complex Ciudad Deportiva that had opened in 1975 by the former Boca president Alberto José Armando but no longer was owned by the club, was sold and the money was used to clear debts.

After over ten years without a national league title, Boca Juniors finally won the Apertura in 1992. Another turning point was the arrival of the new manager Óscar Tabárez in 1993. 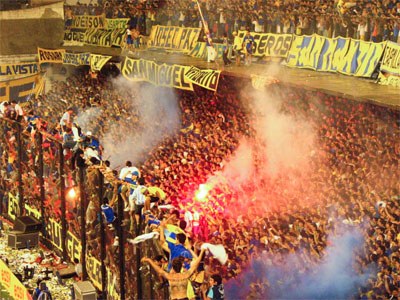 Boca fans at the Copa Sudamericana final vs Pumas UNAM in 2005.

Boca Juniors had a strong team around year 2000. They were in the top of Argentine football with three successive league titles (1998-2000) with a team including players such as Juan Román Riquelme, Marcelo Delgado and Martín Palermo. The pinnacle came in 2000 with a glorious treble. Besides the Primera, they won the Copa Libertadores and the Intercontinental Cup that year.

They are one of the most successful clubs in the world when looking at the statistics from the Intercontinental Cup – Boca has won the cup three times, an achievement done by only four other clubs (Milan, Nacional, Peñarol and Real Madrid).