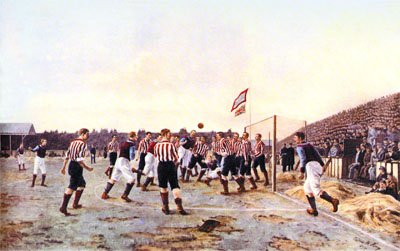 An painting depicting Sunderland playing against Aston Villa in 1895 at Newcastle Road.

Sunderland was established in 1879. The “AFC” stands for Association Football Club.

Together with Preston and Aston Villa, Sunderland was among the dominant football clubs in England during the 1890s, winning the First Division in 1891–92, 1892–93 and 1894–95. Both teams were reinforced by imported Scottish players and they also played a passing game which for the time was typical Scottish opposed to the dribbling game that otherwise was an English trademark.

Sunderland was, however, not as successful in the FA Cup, in which the participate for the first time in 1884-1885 season. After being the runners-up in 1923 they finally claim its first title in 1937.

The Roker Park stadium served Sunderland AFC for almost a century and had a 75,118 record attendance from a FA Cup match in 1933. But after the all-seater rule made by Football Association in the 1990s, the capacity was decreased to 22,500. The construction of Stadium of Light solved the problem with a capacity beyond 40,000 when it opened in 1997 (the capacity expanded already the next year to 49,000).